I was born and schooled in Pune, a busy metropolis on the West coast of India. As a final year PhD student at University College Cork (before that I studied at Durham and UCD) my training reflects a non-luxury education in Western classical music, on which I’ve published (Felfeli-Crawford on Mozart, 2019) and a mutual regard for Western popular music, notably the 30-year career of 1980s UK synthpop band Erasure, comprising of Vince Clarke, and Andy Bell, who have written, recorded and performed hundreds of songs together. However, since the publication of music theorist Philip A Ewell’s ground-breaking Music Theory Online article (Ewell 2020), elite music analytical techniques including and especially Heinrich Schenker’s voice-leading graphs have been widely condemned as being fundamentally racist.

As a minority scholar, I advance a counter-argument that doesn’t throw the proverbial baby out with the bathwater. In what follows, I aim to show how voice-leading analysis can be a useful addendum to ethnomusicological work on decolonisation, especially when the analyst is BBIPOC (as I am), and the subject matter falls outside the Western classical canon.

This brings me to the culture bearers: Erasure’s Vince Clarke and Andy Bell: their combined musical output and influence in popular culture spans an extraordinary length of time, consistently, as my doctoral research aims to show. Erasure’s best-known hits are Sometimes, Love to Hate You, Always, Blue Savannah, and especially ‘A Little Respect’ which you can watch and listen to below:

While I agree that there are many reasons to avoid elite music analysis and Western notation entirely, an Indian born and educated music scholar as myself has had to demonstrate competency in this system, in order to gain access to advanced academic degrees in music that are unavailable in my native India, where my parents still live, and where access to 24/7 electricity and clean running water are still considered first world luxuries. As someone who has had to work harder than most to pass the theory and analysis requirements of advanced music degree programs (though without being taught the loaded Austro-German philosophies that prop them up), I’d like to see if there’s anything worth salvaging in voice-leading analysis, before we simply substitute Schenker graphs with spectrograms or soundboxes. This is a song called ‘Shot the Satellite’, taken from Erasure’s 2020 album The Neon.

The voice-leading graph you see has been prepared after I transcribed the song by hand, and at the piano; as such, it presents fertile new ground from which to experience an ageing popular music creativity steeped in unapologetic tonal expressivity and classical conventions. By dispensing away with the fundamental structure or ursatz (as nearly all UK Schenkerians have done for many decades), we free up a space from which to connect two disparate structures: the verse motif of 3 – 2, which, incidentally, makes me also think of the two notes in Hindustani rag, the Vadi and the Samvadi, which correspond to “Shot the Satellite’s” primary tone and its lower neighbour. The second motif is the upper neighbour note 6 moving down to 5, which is the building block of the “Shot a Satellite” refrain; the main thing to consider is the way in which these surface and middleground motifs delineate formal divisions: verse to pre-chorus, pre-chorus to chorus, and so on, thereby performing a range of inter and intra thematic functions. Lastly, we might notice the B flat (flattened second) which, as Neapolitan harmony, forms the scaffolding of a twisted subdominant tonality, which finds full expression in the underlying A minor tonal scheme. There are many more connections to be made between the various levels of structure that don’t require rigorous training in (Western) graphic analysis, for example the bass arrival on the relative major C adds a moment of potent expressivity in the song’s otherwise conventional tonal procedures. You might now want to listen to the song, below:

By avoiding music theoretical terminology like prolongation, elaboration, diminution, and even modulation, I take only what can be readily transferred across from classical music theory to short pop song forms as Erasure’s. Hopefully, and as the saying goes: a picture speaks a thousand words! Of course, I’d like to add also that the graph above need not be thought of as “Schenkerian” at all – many principles of elite music analysis, notably voice-leading, are known to those of us (including many ethnomusicologists I’ve met and studied with) who’ve had any kind of WAM training via the humble piano lesson (listening to, listening for, and bringing out inner voices, for example); as such, Schenker (correctly denounced as racist and elitist) or his followers should not be given credit for my analysis.

Fig. 2: The author pictured with her school leaving class, in white salwar-kameez, in her native city of Pune, Western India, c.1998. 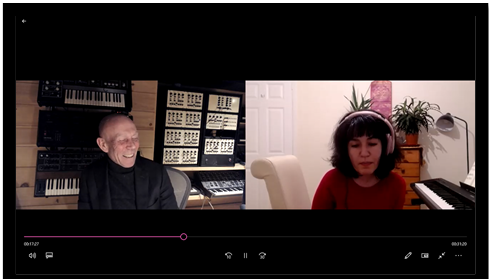 Fig. 3: The author in a 2020 meeting with the culture-bearer of her PhD thesis, Erasure’s Vince Clarke.

My concluding comments pertain to music analysis of Western music, as conducted by me – an Indian born and educated scholar, now based in Ireland. If we consider the literature of decolonisation, from Audre Lorde in 1984, to Tuck and Yang 2012, Kennedy 2016 and Kale 2017, we see how my analysis of “Shot a Satellite” might appear regressive or even irrelevant in the current music academic climate. But – as a Western, educated, democratic Indian, from a low-income Zoroastrian/non-elite background, I object to the wider assumption that Indian epistemologies or technologically-conceived analytical methods are better for decolonisation purposes than Western ones like music theory. Those of us who are the product of a non-luxury music education will know all too well the feeling of being spoken for, by white ethnomusicologists in privileged positions, who ensure that our Westernness, our interest in their culture, is always kept under wraps in the academy. Naturally, decolonisation needs to take place to ensure all marginalised groups (the poor, the disabled, the BBIPOC, LGBTQ) can access an advanced degree in music, and in this regard, voice-leading analysis can be deployed also to instigate debate and dialogue in mandatory music theory courses. Indeed, any rigorous effort to decolonise should also consider the merits of recolonisation, a term I’ve used elsewhere to defend the career aspirations of others like me, for whom studying, performing, creating and analysing Western music is also a viable way to de-something and re-something – though we don’t always know what.

So, to put it another way, analysing Erasure through the lens of elite music analysis offers a lifeline to the person of colour scholar, who can express the magic of Andy Bell and Vince Clarke’s music (and not Schenker’s) in the language of tones alone. But it goes beyond elite music analysis, and happily into the domain of ethnomusicology (though here, I’m the Indian ethnomusicologist, researching Westerners and their music). When we consider the intersectionality of race, class, gender and sexual orientation, we see how the band members’ own marginalised subject positions come into sharp focus also. Bell and Clarke are both from non-elite backgrounds; Bell has been one of the first openly gay pop icons in Western popular culture, and he is also an inspiration for other HIV + people; plus Clarke is 60 and Bell is 56 – and they continue to write, perform and release pop records of quality. Having talked extensively to both artists as part of my doctoral research on their music, my Erasure analysis should also be held up as a self-conscious critique, on my part, of the deeply-conservative, heteronormative music and cultures of my native India. Writing in 1984, Audre Lorde famously stated ‘the master’s tools will never dismantle the master’s house’ (Lorde 1984). But maybe given time, and in the right hands, they will. 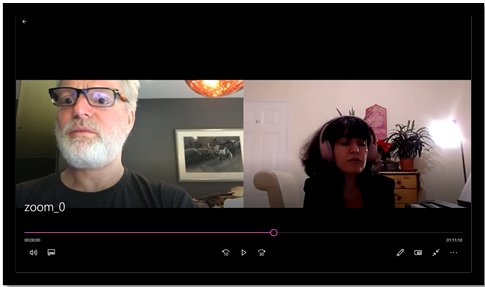 Fig. 4: The author in a 2020 meeting with the culture-bearer of her PhD thesis, Erasure frontman, LGBTQ icon and songwriter Andy Bell. 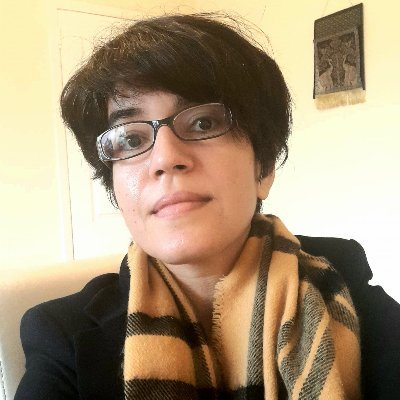 Dr. Karishmeh Felfeli-Crawford (pronouns: she / her) is an ethnomusicologist born and raised in Pune, India and now based in Ireland. She holds a PhD in music from University College Cork, Ireland and researches/publishes music analysis of Indian popular music (rock, Bollywood, fusion); synthpop of British band Erasure (the subject of her PhD) and Mozart. From 2020 to 2021, Karishmeh was the Co-Secretary for the ‘Music Analysis’ special interest group of the Society for Ethnomusicology.